John and I have two adult children, our daughter Ryan Caroline was born first followed by our son, Tray.

This is the story of Tray’s kitchen pound cake adventure. Tray has always been the outdoors risk taker of the family. Fire always fascinated him. He has a facial scar lesson to this day to prove he had to be more cautious around fire—that was in fourth grade. His interest in fighting fires never declined and when he majored in forestry, he volunteered with the local forest rangers to finally settle into a career of wildland firefighting. Those boys are easy to spot in a restaurant…it’s the boots!

He drove his red Toyota truck to California several times to study the career in ernest at Humboldt State University. Then spent multiple seasons fighting fires in the West and seemed content. While there, in those days after 9/11, he met lots of people, some who had served in the military and some on their way. He, too decided to serve his country by joining the Marines.
Boot camp was tough but he didn’t complain. Ryan Caroline and a group of his good friends flew out to his graduation in San Diego. He came home with a horrid cold, pink eye and several pounds thinner, on leave, before heading to be based out of Camp Lejeune. We got to shed tears when he left for base and we got to greet him there when he came back from tours in Iraq, Afghanistan and the country of Georgia.

Four years later, when at last he was coming home to stay, we were a happy set of parents. He walked into the house in September. One of the first things he wanted was a fire in the fireplace!
Santa had brought me a gorgeous shiny, black mixer and “tinkerer” Tray decided to tinker. He perused the small collection of recipes that came with the mixer and decided he was going to make a pound cake!

Kitchen freedom is something we never balk at. Admittedly, it was jaw-dropping to see all the ingredients go into the mixing bowl at one time. There was no question in our minds that the cake was going to be a tremendous disappointment to him.

An adult lesson—parents don’t know everything—you can see in the photo that we had the most beautiful and delicious it’s good-to-have-you-home pound cake ever!

Thanks for sharing a slice of pound cake, Barbara Norman 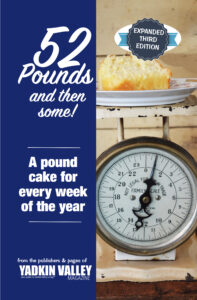